skip to main | skip to sidebar

JOHANNESBURG — Lesotho-born Thato was brought to South Africa at age three, by a woman she knew simply as "granny". Five years later, her "granny" sold her into sexual slavery. The woman who bought her was running a sex ring that police are still investigating to find out how many children were involved.

It's a scenario that South African authorities and child welfare campaigners are already working to prevent during the football World Cup next year, which authorities fear could draw in child traffickers hoping to cash in on the fanfare around the games.

Thato, now 10, was rescued just three months ago by a social worker who brought her to Amazing Grace Children's Home, which houses 79 children outside Johannesburg.

The home's founder Grace Mashaba, who explained Thato's story, said her parents probably had no idea that the "granny" would sell their daughter.
"That 'granny' doesn't have children, so she keeps asking people, 'Can you give me your child so she can stay with me?' She has a good house, so people trust in her," Mashaba said. 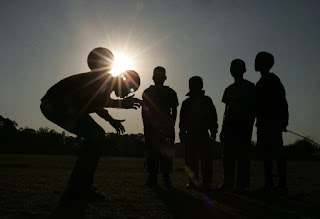 Thato at least was able to speak about her abuse. Another 10-year-old Lesotho girl rescued from the sex ring is too traumatised to talk, Mashaba said.

An estimated 247,000 children in South Africa now work in exploitive labour, including prostitution, according to the Child Protection Action Plan for the World Cup, created by government?s department of social development.

Campaigners worry that the problem will grow with the influx of tourists next year, especially as South African schools will be closed during the World Cup, which runs from June 11 to July 11, meaning many children could be left unattended during the day.

"Child trafficking is a big concern because of the big economic pull of the event," said Stephen Blight, the head of child protection in South Africa for the UN Children's Fund (UNICEF).

"All the fans and visitors spending money will create a whole network that criminal networks will want to benefit from."

The government worries that child trafficking could increase as poor South Africans struggle for a slice of the four billion dollars the World Cup is expected to generate.

Parliament is due to consider a trafficking law early next year, aiming to prevent children from getting recruited to beg or hawk souvenirs on the streets, or more worryingly forced into prostitution.

Rebecca Pursell, a social worker for Kholisa Management Services, a child advocacy group, said the school holidays could add to the problem for children.
"They will be loitering around without much activity, which places them at high risk not only of trafficking but of sexual exploitation," she said.

In addition to cross-border trafficking from Zimbabwe, Mozambique or Lesotho, many poor South Africans will leave rural areas to look for work in the cities during the games, she said.

Mariam Khokhar, of the UN's International Organization for Migration, said prevention campaigns are already underway, including theatre programmes in rural areas to educate people about the danger of trafficking.

"Criminal elements often tend to exploit such events, and there will be an increase in criminality which could possibly include trafficking," she told AFP.

For Thato, she will live at the Amazing Grace home for now. Many of children stay at the home until they finish high school, Mashaba said. Most of them have been abandoned, orphaned or abused. Those who have been trafficked from other countries can be repatriated, but often choose to stay, Mashaba said.
"Even their own families, they do sell those girls. It's the people that you know that traffic the children."
Posted by Norah at 12:33 AM

If you have read this blog, or even stumbled upon it, please send me an email with your comments - norah@xsinet.co.za
Visit our website at www.informationempowers.org.za